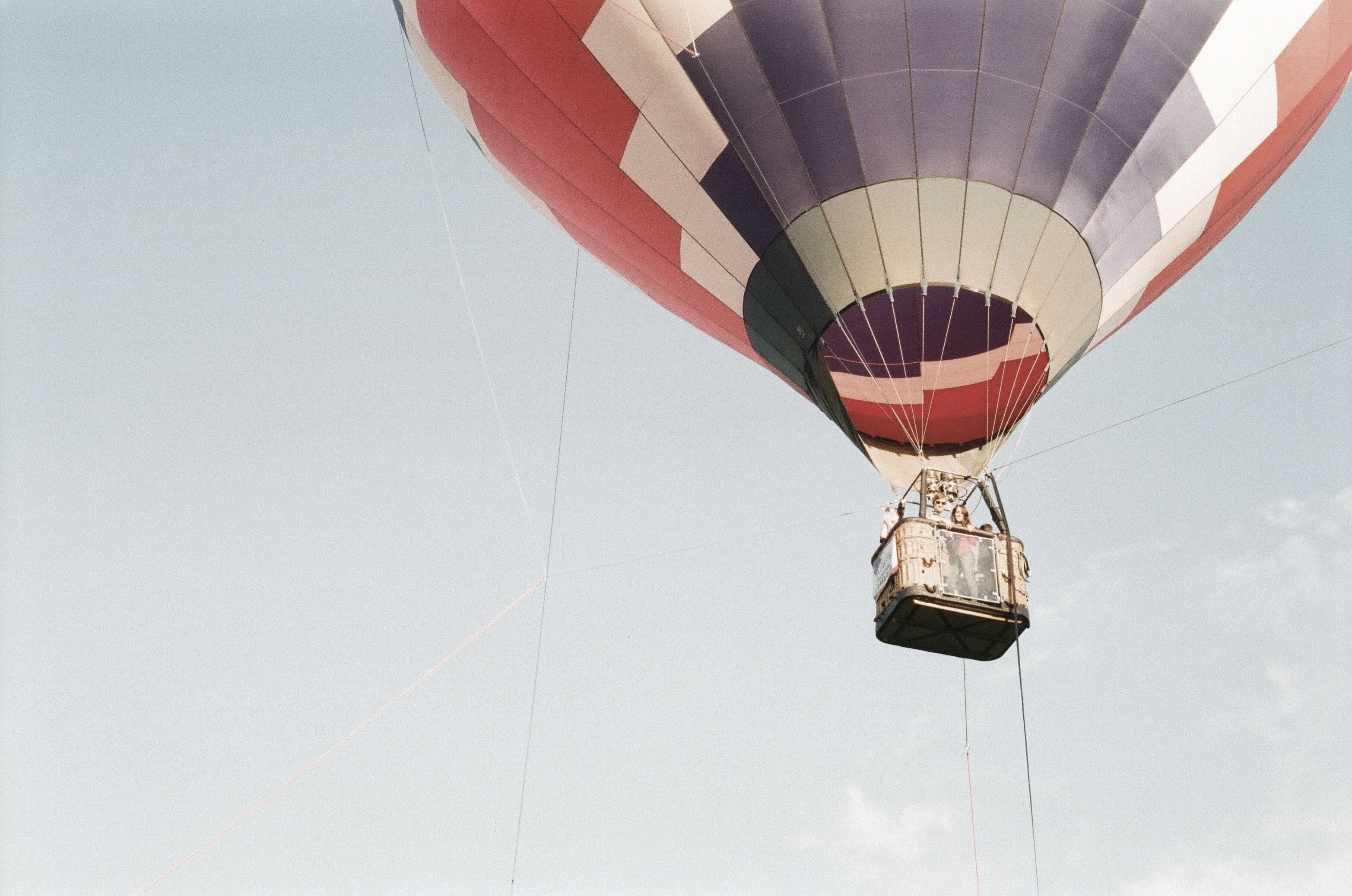 Hot as snot that day in July 1974, earth-steaming sticky.

Puffballs losing shape, their dandelion seeds parachuting off for new.

Just another summer day—to figure out what we might do.

She was ten, a grade above, and I was barely nine.

We met halfway on the wooded grass-lined trail

our fathers mowed for us, between her house and mine.

A sudden surprise—we heard a roar, making our hearts jump.

Like a blast furnace firing: “There, there, I can’t believe it!”

I screamed. “Right there!” Imposing red, blue, yellow, and green

blocked out our sky just above the treed canopy.

The giant snuck up, come from a land called nowhere:

An enormous hot-air balloon, right there, here, for us!

Between firing growls, its rider yelled out, “Grab the rope!”

Multiple times we heard him, our insides ecstatic, beyond afraid.

Among the trees, we played chase with its brown braided tail.

The monstrosity shakily ours secured by three rope-burned hands.

My gaming partner had a cast on one, from gymnastics, I supposed.

Feisty, strong, our hands held on now vise grips to their death.

Skin torn, stung, with our bones nearly lifting off the ground.

Triceps burned, shoulders stretched, as if we were locked in a rack.

Instructions flew from the flyer above, our new hero.

“Don’t let go; that’s it, girls—we’re counting on you, over in the open there!”

Loyally directed, morphing into bent-over oxen, we dragged our carnival

load to the flattest place, navigating around and under electric fences—

Into the grazing home of our already-wound resident horses.

Terror in their eyes, they acted possessed, as if in the second coming.

bucking and snorting, displaying flared nostrils in their hissy fits.

Struggling but victorious, we arrived at the proposed resting pad.

Our new best buddy, Fred, told us that we must move aside.

Then he let his fire-breathing ride down, and we could let go.

Anchoring our prize, he offered rides, the first free for us.

Not as exciting as our hunt and our capture!

One dollar was the ticket price for anyone else who came and wanted to go.

OK, maybe not as many as Kevin Costner had, but it was our field.

This was indeed real and not a dream.

for tethered rides the likes of which none had seen.

Visitors had an added spectacle as the horses’ neurosis grew.

Exponentially fed by each ticket, enabled by the roaring fiery imposter.

A full sunny day of work and play it was.

One worth remembering, especially for the two of us so young.

As for me, that day must have planted in my psyche

a seed of spiritedness, a contributor to my seeking out of adventure,

for not much that’s humdrum or without challenge

in my future would hold my interest!